A NEW Disney Storybook for ALL AGES! The Sweet Adventures! of Denim & Rose!!

Whether you're a Disney fan, lover of sweets, or want to share some adorable heartwarming stories with the little princess in your life, you will be charmed by the SWEET friendship of Denim and Rose. The Sweet Adventures! of Denim & Rose is a new story series developed by international artist, Holly G! and written by yours truly, Princess Jeanie!

Please come support our creation and help make the world a little bit SWEETER!
Follow the LINK TO OUR PATREON PAGE HERE for as little as $1!
STORY SAMPLE BELOW!
Disney! Sweet Treats! Fantasy! And SOOOOOO MUCH CUTE!!!
Welcome to The Sweet Adventures of Denim Sparkles and Rose Glitter! 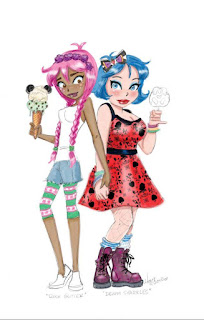 Meet Rose Glitter and Denim Sparkles, two teen gal pals who have worked hard all school year and are ready to embark on their very first summer adventure on their own. But this isn't just any summer adventure. Rose and Denim are exploring the Theme Parks and Resorts of Walt Disney World on a QUEST. Their quest is to find the best, most indulgent, Holy Grail, sweet-treats that will make their mouths water and their hearts sing. They will encounter evil Disney villains, brave rough river rapid rides, bake in the hot Florida sun, and hobble on aching feet to achieve their goal of eating each mouth-watering, special treat!! Most importantly, their adventures will teach them how sweet friendship can be!

Pledging and Rewards
All Patrons will see a glimpse into the creation process of Sweet Adventures! This will include lots of Disney Parks trips and lots of little behind-the-scenes surprises. For those who pledge at the "Cookie" level and above, each Sweet Adventure short story will be delivered to you digitally as it is created. And, for the awesome Patrons who would like to enjoy a bit of their own Sweet Adventures!, there are other great rewards that will bring you into a world of fantasy where you can follow along with Rose and Denim. So, grab your favorite treat, relax, and enjoy a fun sweet adventure.
Ultimately, these stories will be combined into a book with a few extra stories added and a beautiful illustration for each of Denim and Rose's Sweet Adventures!
So, come join Rose and Denim on their Sweet Adventures!  Maybe YOU will become a part of the story too?

About the Creators, Holly and Jeanie
Sweet Adventures! is illustrated by Artist, Holly K Golightly. Holly has worked in the comic industry on projects such as Archie Comics', "Sabrina the Teenage Witch" and "Josie & the Pussycats." She is also the creator behind many projects such as "School Bites" & "Prince Pangur Ban the Fluffy." Holly works with her husband, Jim Balent, publishing creator-owned comics through their publishing company, BroadSword Comics. Their flagship comic, "Tarot Witch of the Black Rose" will hit its #100th issue this September! On the rare days when she isn't creating beautiful art for the world, Holly enjoys vacationing at Walt Disney World.  She also enjoys indulging in the many sweet treats that are unique to those trips. Her most recent favorite is the BB-8 cupcake found in Disney's Hollywood Studios.

Sweet Adventures! is written by Author, Jeanie Gallo. Jeanie has worked as a writer in the legal field and engineering industry. For the past few years, she has been happily writing a Disney-themed Blog, The Princess Papers. She currently lives in her new castle near Walt Disney World and you may find her in the parks or resorts scribbling away, writing all about Denim and Rose's Sweet Adventures! Her favorite Disney sweets are the classic Mickey chocolate-coated crisp rice treat tied with the special Disney adorable caramel apples. You can never go wrong with the classics!

How Denim and Rose Were Born
When Holly met Jeanie, who is a fan of Holly's "School Bites" series, and they realized that they are BOTH big Disney fans, BOTH have a serious sweet tooth, BOTH are an only child, BOTH love the world of fantasy and imagination in fiction, AND BOTH HAVE REALLY FUN HAIR, an instant bond formed! Fate took hold and Rose and Denim were born.
In Sweet Adventures!, Holly and Jeanie take you into the fantasy of their dream childhood with the creation of Rose and Denim. Through them, Holly and Jeanie share with you how they would have experienced the magic of Walt Disney World as teen best friends exploring the "World" together.

Sweet Adventures! is a CELEBRATION of youth, fantasy, happiness, and wonderment!
Plus, a few sweet sprinkles and a cherry on top!

TO READ MORE, BECOME A PATRON AT THE $5 COOKIE LEVEL OR HIGHER BY CLICKING HERE!
*You can find Jeanie on Twitter @PrincessPapers and on Facebook @ThePrincessPapers and @JeanieGallo. You can also hear her on The Disney Dream Girls Podcast @DisDreamGirls on Twitter!
*You can find Holly on Facebook @HollyKGoLightly . Website: http://broadswordcomics.com/
Posted by Jeanie Gallo at Monday, June 13, 2016