(Please excuse the photo quality on this overcast evening.)
Last week I was really disappointed when I tried to go to the (newish) Taste Track food kiosk in Epcot for dinner because it closed right before I arrived. (Yes, get there early kids, it usually closes at 6 pm!) So, this week, I was determined to get there early. Today, SUCCESS...or was it? 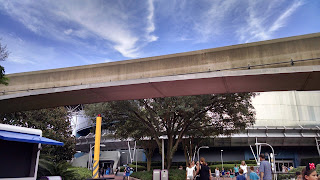 Taste Track is located at the exit of the beloved Test Track attraction in Future World in Epcot. It is a quick-service, walk-up kiosk (no seating, just some high tables) that serves unique grilled cheese sandwiches, tomato bisque, and salad. 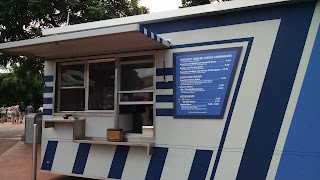 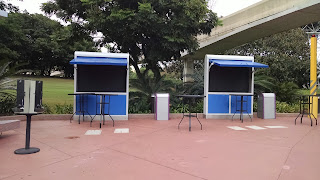 See why I was so excited? GOURMET GRILLED CHEESE! Unfortunately, that's where the excitement ended. I really wanted to like this place. Unfortunately, there were multiple issues with service, food quality, and food safety. It was the latter that led me on a trip to Guest Services. I am happy to say that in true Disney style, they took the issues very seriously and I would expect Taste Track to be back on track in the very near future. 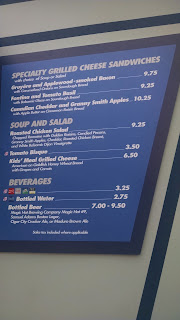 My unfortunate tale...when we first arrived at the window to place our order, we noticed that the kiosk (more similar to a food truck) had at least five Cast Members inside. However, most seemed a bit preoccupied with carrying on rather than helping Guests. One Cast Member did eventually come over to take our order. She really tried her best, but a severe language barrier made it impossible. Her English was limited to "bacon" and "salad." After multiple attempts, another Cast Member helped with our request for "dressing on the side." This led to an additional problem. Nobody could figure out how to put the dressing "on the side."  I eventually suggested a cup and they used a paper soup cup (very glad that I requested this. More on that later.)

When our order was totaled up, we noticed that the price was high. Their computer system was charging more for the items than the menu listed. We pointed it out and were told that they knew it was an issue but there was nothing they could do about it because there was no manager/leader there. (Anyone who knows Disney service, knows that there is ALWAYS some form of supervisor available somewhere.) We paid the higher amount and received our food.

We ordered the Gruyere and Apple-wood Smoked Bacon with Caramelized Onions on Sourdough Grilled Cheese with a side of Tomato Bisque (9.75). 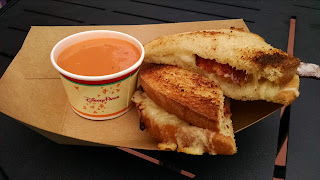 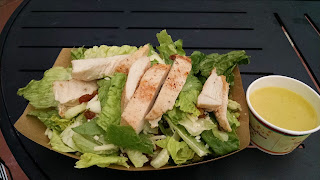 They look pretty good don't they? I'm just going to list the issues with the food quality. You can make your own conclusions:
1. One of my main concerns that led me to Guest Services was the food temperature.  The soup was luke-warm (unsafe since it contains dairy). I returned it and was told that the kettle had not been working right all day. (WHY ARE YOU SERVING IT THEN?) 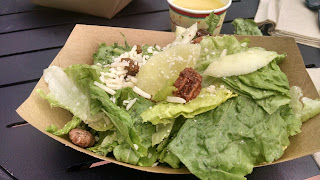 I received a side salad in its place. This was exactly the same as the entree salad in size and ingredients but without the chicken. I cannot guarantee that that is what the side salad is supposed to be. 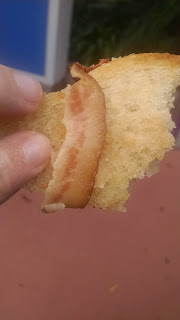 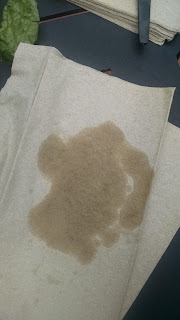 3. I had placed my half of the sandwich on a napkin while I returned the soup. I returned to find this. It soaked the whole way through and left a puddle on the table under it. 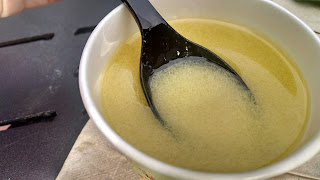 4. This is the reason that I was glad that I asked for the salad dressing on the side. When I looked closely at it, it was separated in a bad way. Again, I was uncertain of the safety of eating it based on the semi-curdled appearance.

Additional observations: the bread was stale and became nearly impossible to chew within a few minutes (I'm really wondering if it was pre-cooked and reheated before service), the lettuce in the salad had a lot of black edges, and the caramelized onions in the sandwich were non-existent.

The good parts were that the cheese in the sandwich and the cooked parts of the bacon were tasty and the salad was loaded with apples, raisins, and candied nuts similar to what are sold at the carts in the park. The winner was definitely the nuts!

Although my experience at Taste Track was disappointing, as stated earlier, Guest Services was very serious about addressing the issues mentioned. They were also kind enough to refund the full cost of our meal despite us expressing that that was not necessary. So, if you are looking for a grilled cheese experience one day, I would still say give this a shot, but wait a few weeks so they have time to work out these issues and get up to SPEED on what we all know Disney quality and service should be.

*Taste Track is handicapped accessible. However, the tables for dining are high and may not be comfortable for use.

*Don't forget to book your next trip with Katherine at Happily Ever After Travel. Simply click the link on the right side of the page to get your free quote! Be sure to tell her THE PRINCESS SENT YOU!