Come join an All-Star group of Theme Park Designers and Artists in this intimate event to benefit the American Cancer Society, Relay for Life.  Check the facebook page often for updates!!

CLICK HERE FOR A LOOK AT LAST YEAR'S AWESOME EVENT!

The list keeps growing, but here are just some of the panel members for 2015: 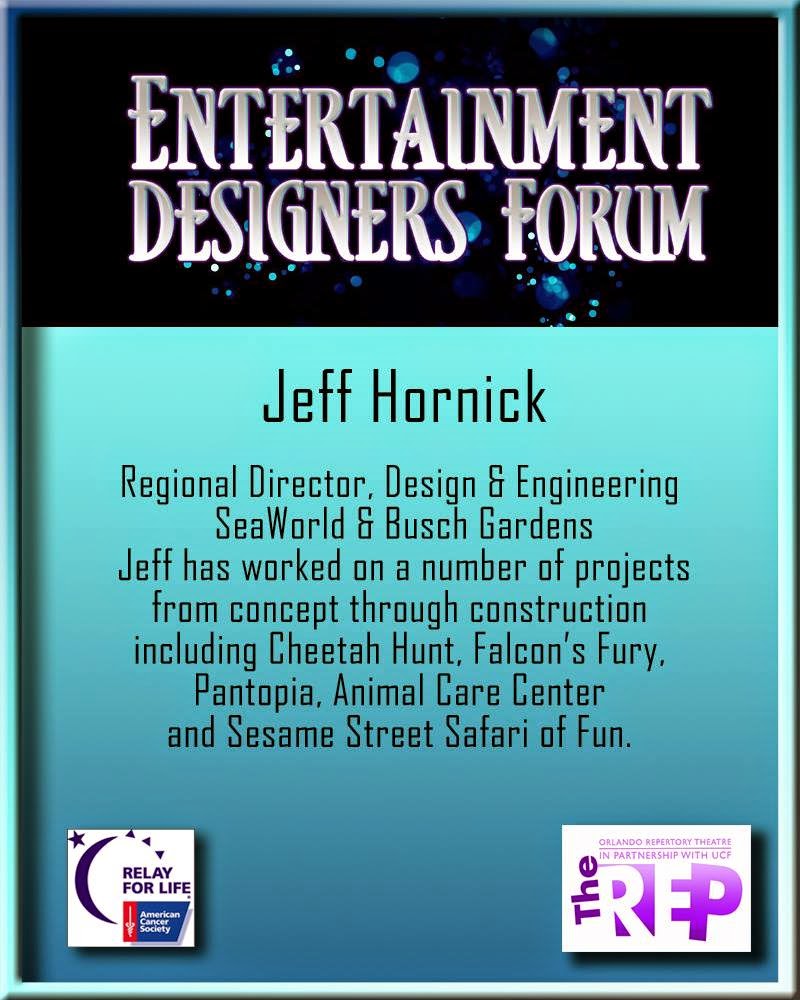 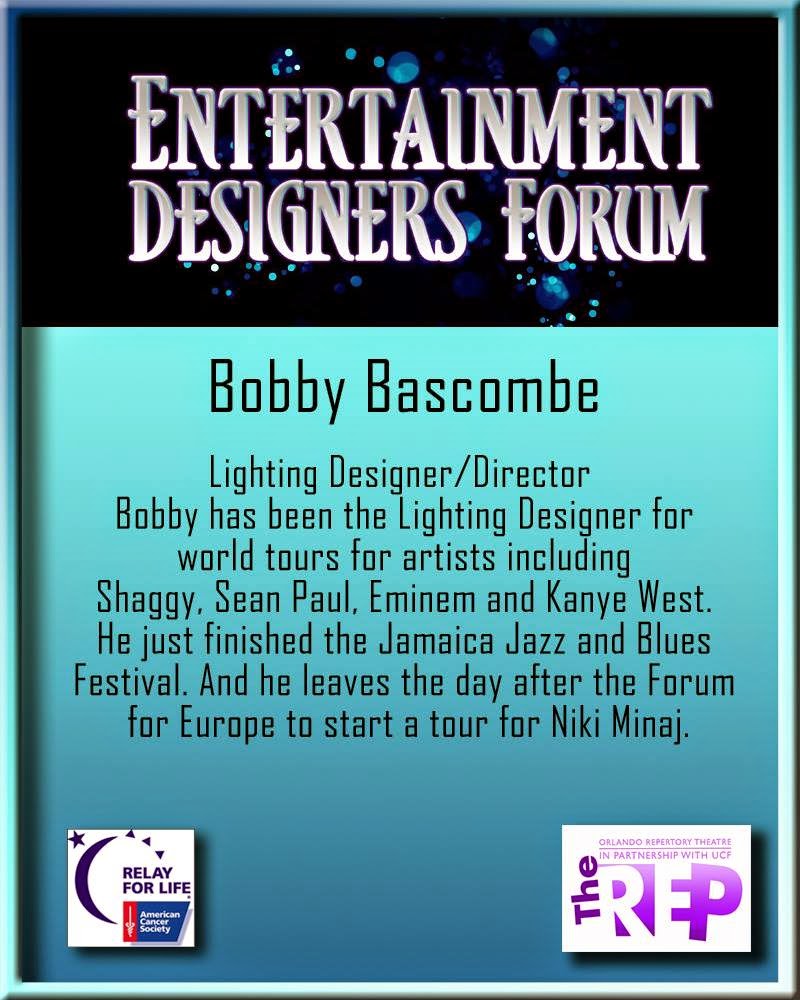 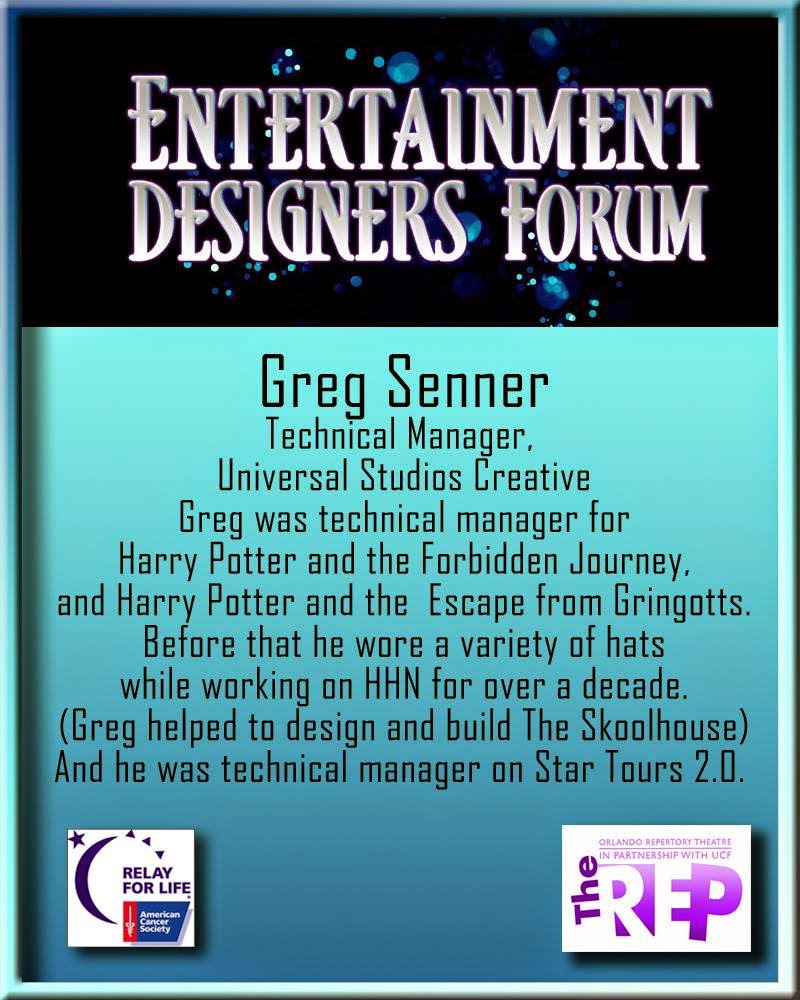 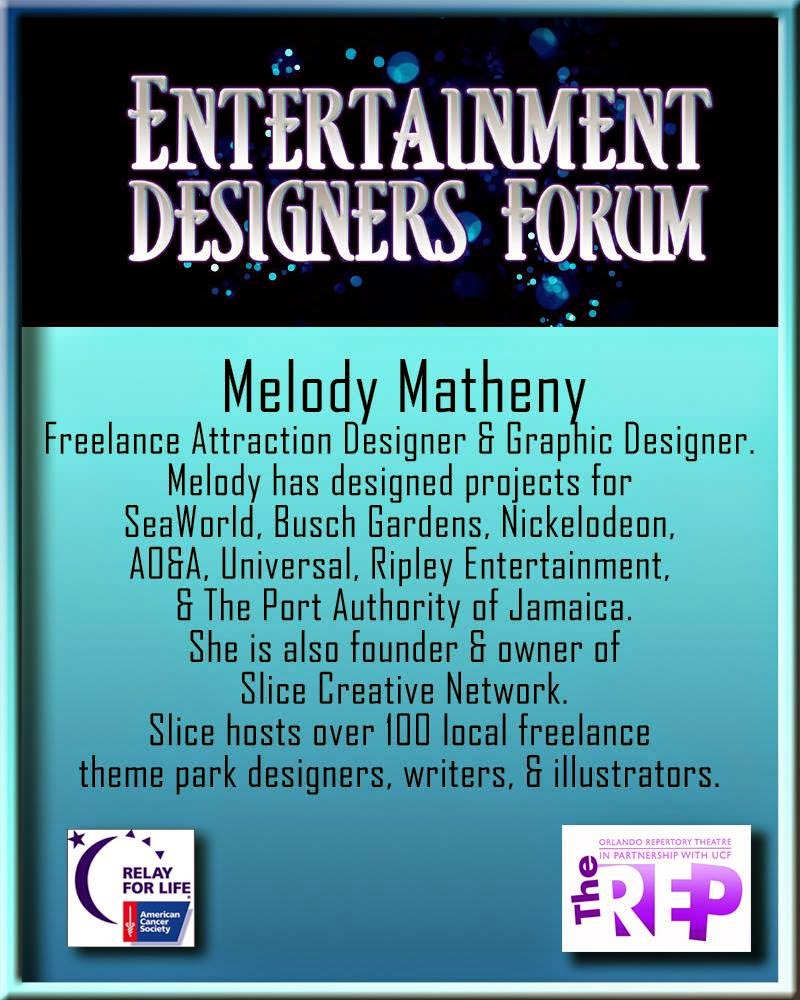 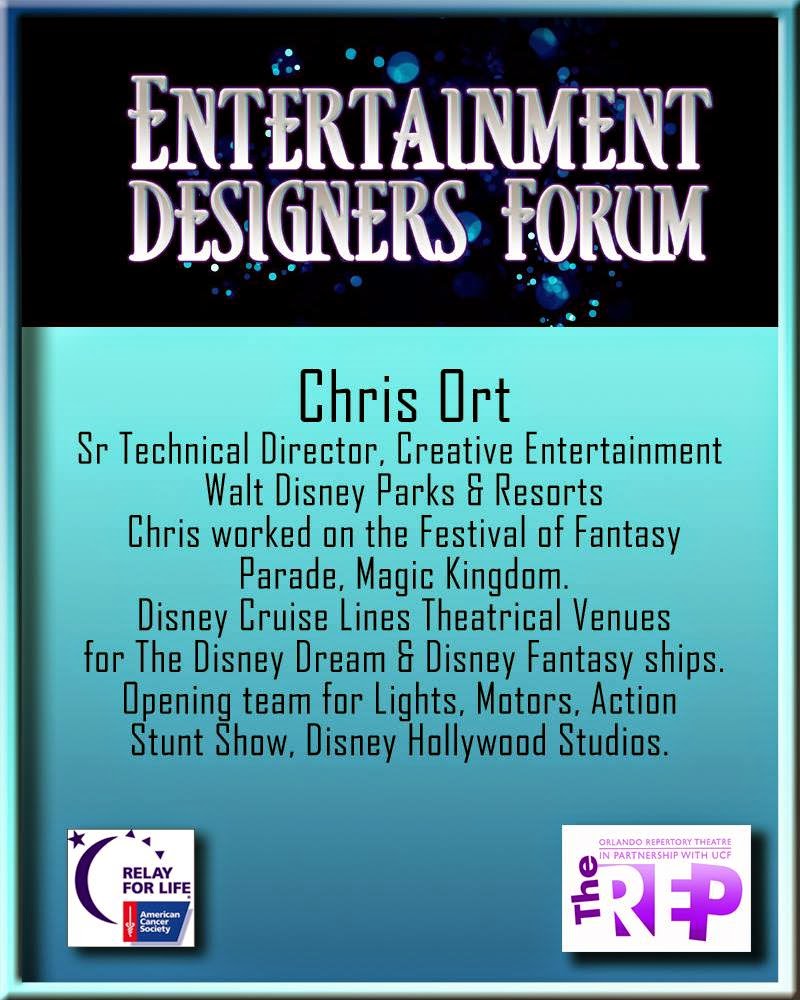 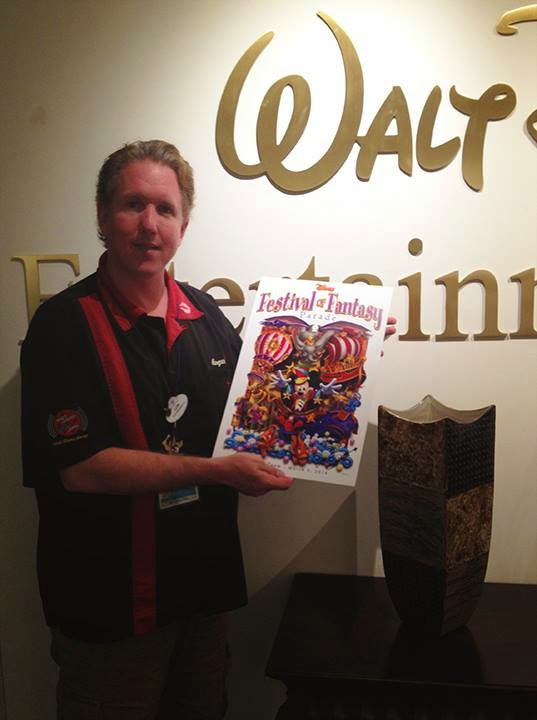 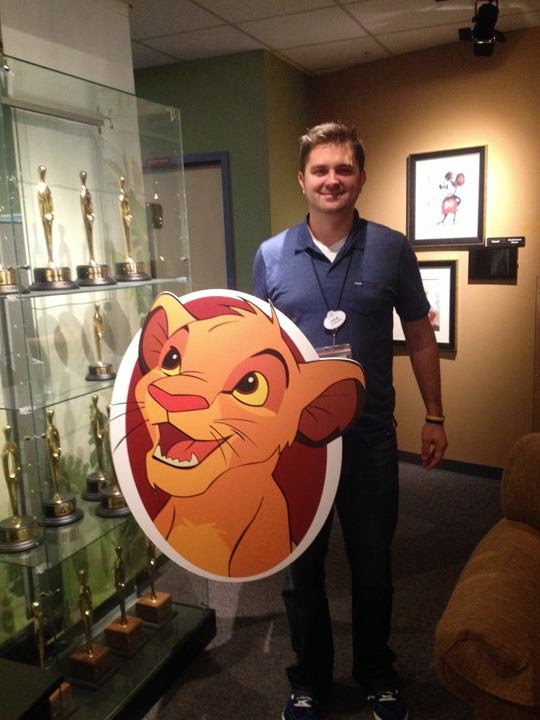 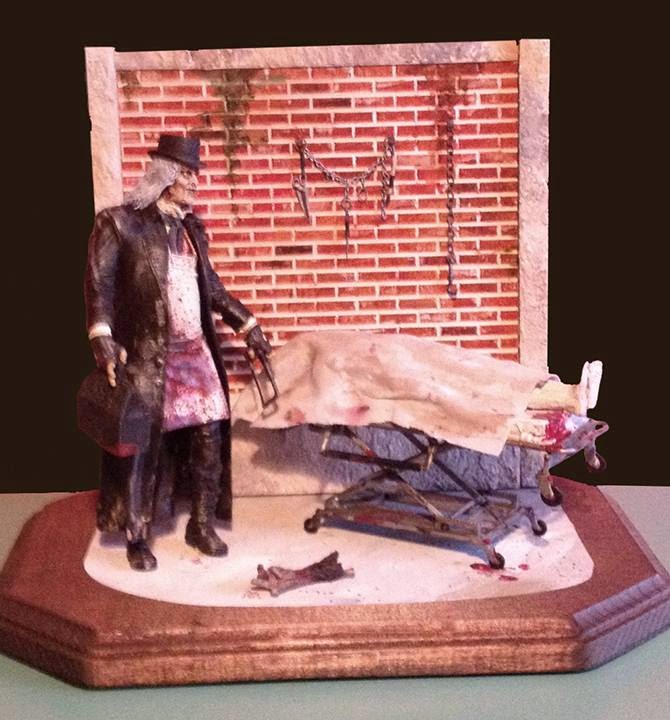 *The REP Theatre is handicap accessible.
*Thank you to Kim Gromoll for his dedication to organizing this annual benefit for the American Cancer Society in honor of the memory of his friend and colleague, Stephanie Girard.
Posted by Jeanie Gallo at Tuesday, February 24, 2015 2 comments: I have to admit that I've not had good luck with the ABC Commissary quick-service restaurant in Disney's Hollywood Studios in the past.  In fact, I was reluctant to go there on a recent trip but the lunchtime crowds helped make my decision for me.  Although I was not expecting much, I was pleasantly surprised and will certainly return again on future trips!

The ABC Commissary is relatively plain for theming. It has a spacious seating area with a clean, sleek design and Television sets mounted around the walls that show clips of popular shows (both current and past) from the ABC Television Network. 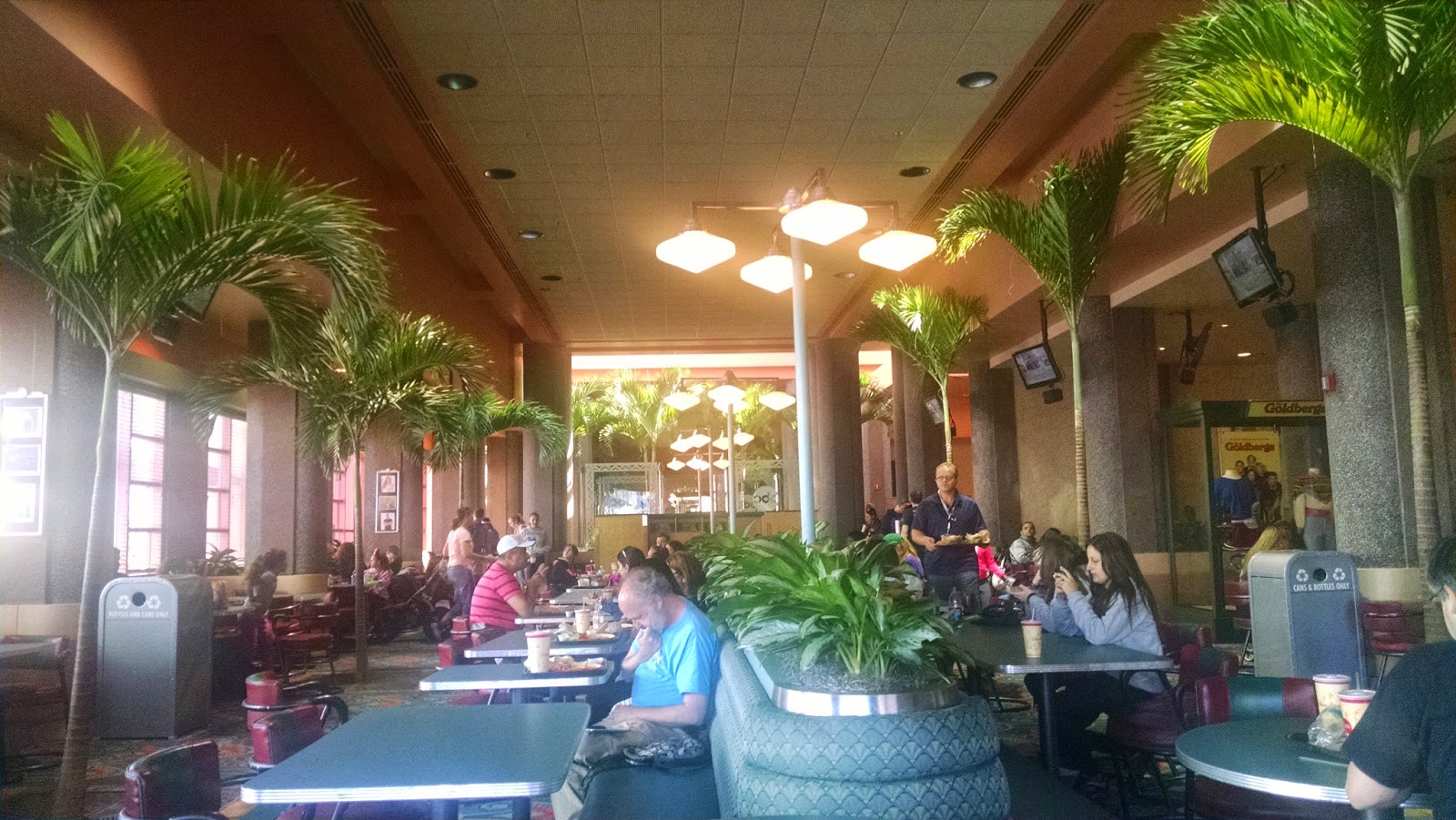 The menu does have the option of the standard burgers and fries, but for those who would like something different, there is plenty to choose from.  The menu includes: a fish and shrimp with fries platter (can substitute for all fish), burger topped with fried shrimp, couscous with quinoa, arugula, and salmon salad, grilled chicken club sandwich, Asian chicken salad, salmon platter, and New York strip steak!

I ordered the Asian Salad with Grilled Chicken.  It was huge and included greens, edamame, crunchy noodles, and a generous portion of grilled chicken.  I usually order dressing on the side because most restaurants use too much for my taste.  I forgot to do that this time but was happy to find that it was lightly dressed with an Asian vinaigrette.  It was delicious and I will definitely return to have it again. 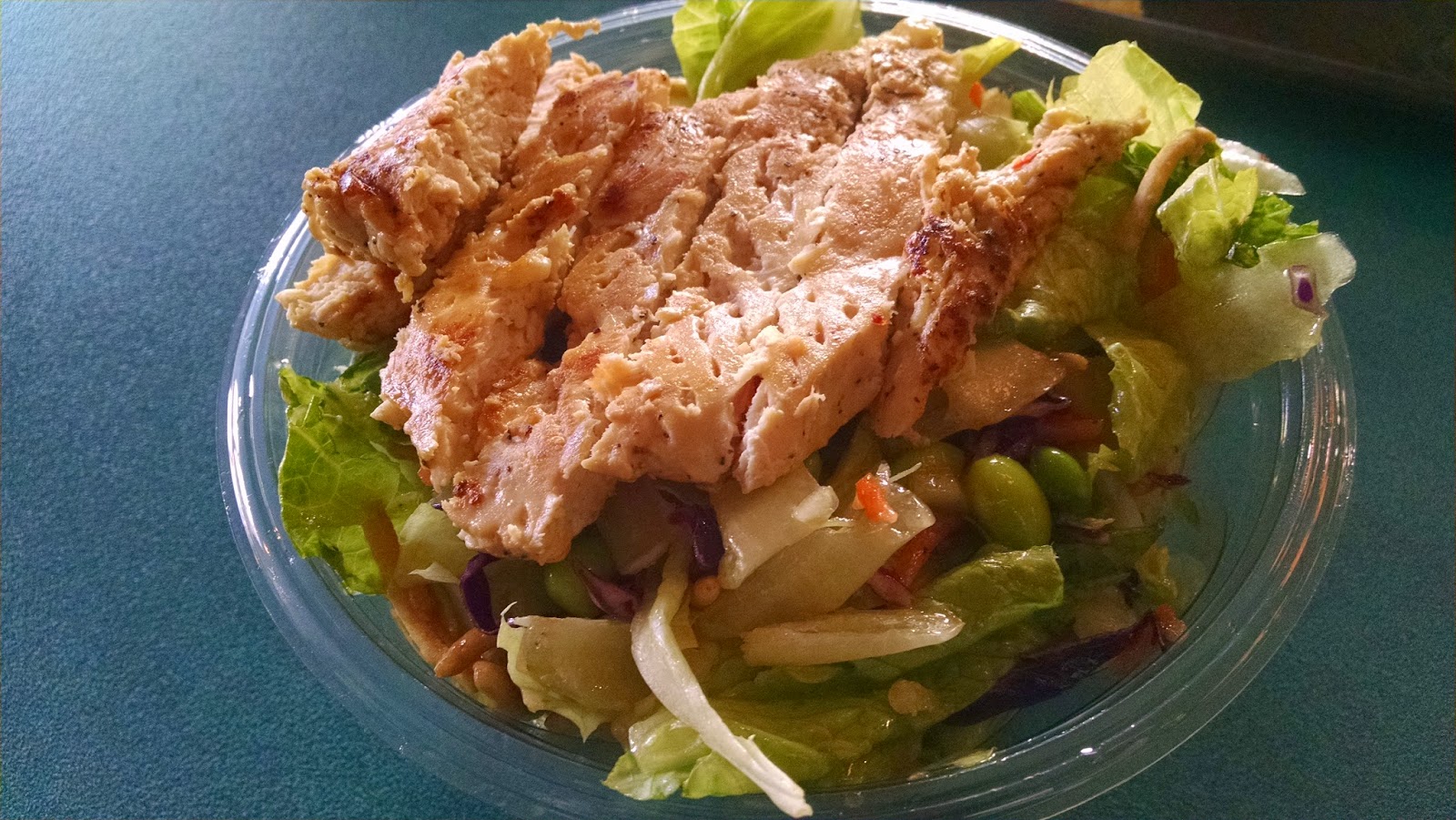 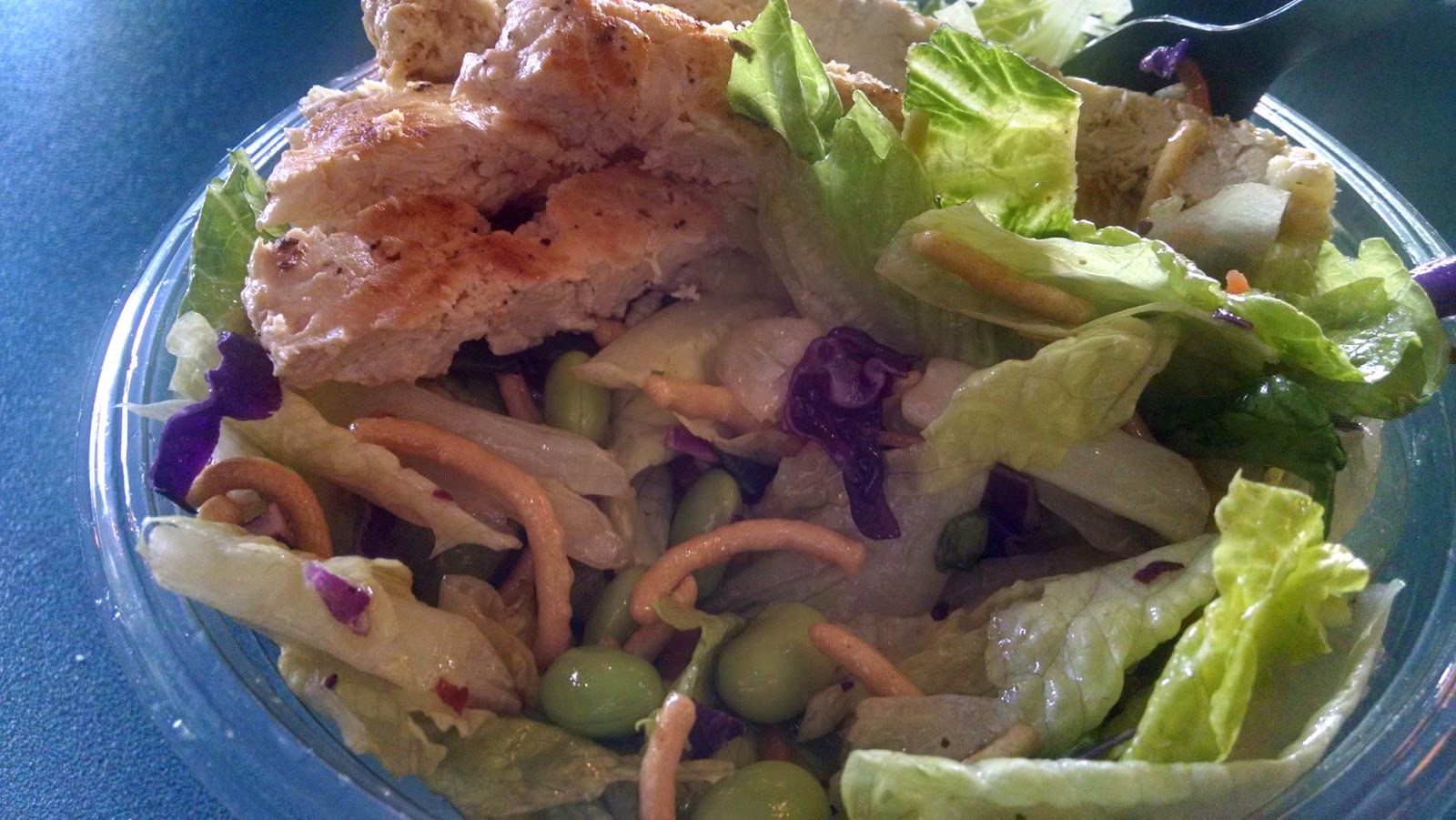 My husband ordered the Seafood Platter but substituted the shrimp for fish.  So, it just became a fish and chips platter.  The fries were standard Disney fries.  The fish was hot, crisp, and flaky.  It looked similar to the fish from Columbia Harbor House in the Magic Kingdom, but this tasted much better to me and the pieces looked bigger. Again, I was pleasantly surprised by the quality. Because this was the week of Valentine's Day, special themed cupcakes were also offered.  We did not try them, but if you enjoy fancy cupcakes look for specially featured ones here during your visit. 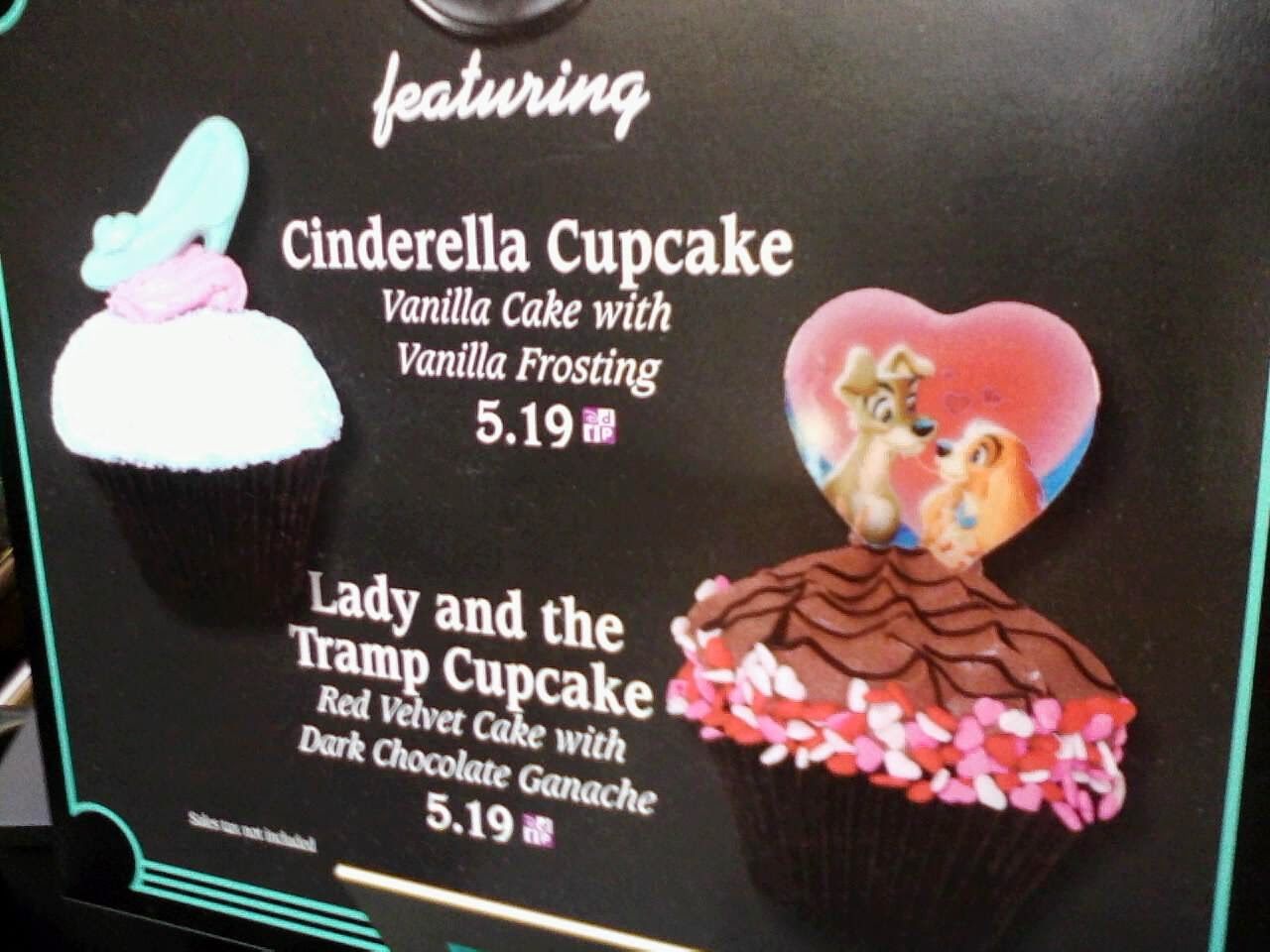 *ABC Commissary is handicap accessible.  However, when we arrived, there were roped lines (probably to manage lunch crowds) that could be difficult to get through. Cast Members are available to assist.
*Follow Jeanie on Twitter @PrincessPapers

*To get a free quote on your Disney Vacation, go to www.ImaginationsVacationsbyKatherine.com and let her know that the Princess sent you!

Posted by Jeanie Gallo at Monday, February 16, 2015 No comments:

I have not been to Sea World, Orlando since I was a littler girl.  However, I recently spotted a special ticket discount offer that I simply could not pass up. Buy one get one FREE Annual Passes with or without water park!  This discount makes annual passes cheaper than 2-Day tickets! GET YOURS NOW! THE OFFER ENDS SOON! BUY YOUR TICKETS HERE!

Now through February 8, when you purchase this Buy One Get One Free Annual Pass you will receive a special Coca-Cola offer: Buy one souvenir drink cup ($11.99) and receive one for 50% off with free refills of Coca-Cola products on the day of purchase*.
Additional Offer Information

Make sure to talk to Katherine at www.ImaginationsVacationsbyKatherine.com to book your Disney/Florida trip and cruises!  Let her know the Princess sent you!

*Follow Jeanie on Twitter @PrincessPapers
*No compensation received by Sea World for this announcement.
*Check park guides for handicap accessibility.

Posted by Jeanie Gallo at Monday, February 02, 2015 No comments:

New England residents (Maine, Massachusetts, New Hampshire, Vermont, Rhode Island, and Connecticut) will receive a free night and a complimentary automatic room upgrade at the Epcot Resort area hotel when booking two nights at the standard price before February 28 for stays through Feb. 3, 2016.

Fans also can enjoy a championship-caliber meal at any of the Walt Disney World Swan and Dolphin Hotel’s 17 restaurants and lounges, including Shula’s Steak House, the restaurant of the NFL’s winningest coach, Don Shula.

There’s no better place to celebrate a team’s victory than the place known for championship celebrations.

For additional information, or to make reservations, guests can call 1-800-227-1500 and mention their home state (valid New England states include Maine, Massachusetts, New Hampshire, Vermont, Rhode Island, and Connecticut). Details of the offer are also available online at www.swandolphin.com/offers/biggame.html. Guests must have valid appropriate state identification to present upon check-in. Based on rate schedule availability. Offer is not valid Dec. 22 – 31, 2015. Taxes, resort services fee and gratuities not included. Not valid with any other special offers, promotions, or for existing reservations or groups.


About the Walt Disney World Swan and Dolphin Hotel
In the heart of the Walt Disney World Resort, the award-winning Walt Disney World Swan and Dolphin Hotel is the gateway to Central Florida’s greatest theme parks and attractions. The hotel is located between Epcot and Disney’s Hollywood Studios, and nearby Disney’s Animal Kingdom Theme Park and Magic Kingdom Park. Guests can discover 17 world-class restaurants and lounges, sophisticated guest rooms with Westin Heavenly Beds and the luxurious Mandara Spa. The hotel features five pools, two health clubs, tennis, nearby golf, complimentary transportation throughout the Walt Disney World Resort, the Extra Magic Hours benefit, where each day, one of the four Walt Disney World Theme Parks is open extra time for guests to enjoy select attractions (Valid Theme Park admission and Resort ID required) and the new FastPass+ service, where guests can reserve up to 3 select theme park experiences up to 60 days in advance of their visit.
Posted by Jeanie Gallo at Monday, February 02, 2015 No comments: