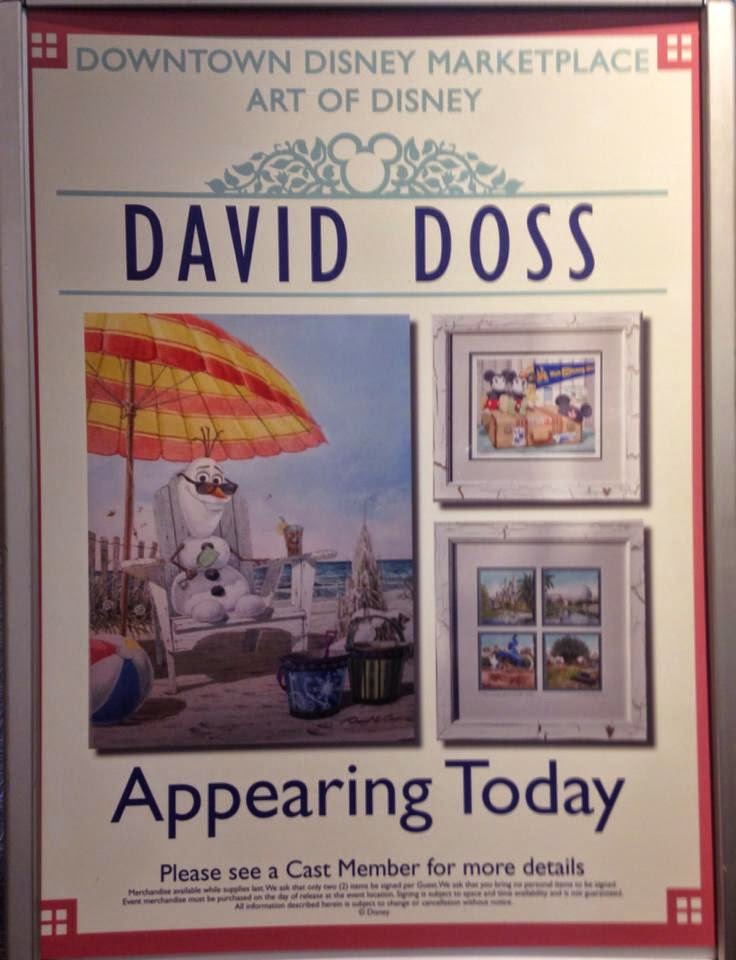 David E. Doss is a licensed Disney artist whose work you’ve likely seen in the Art of Disney stores as well as many Disney resort shops.  His work reflects his love of Disney and is a perfect cherished collectible souvenir from any Walt Disney World vacation.
I recently had the pleasure of speaking with David about his life as an artist and how he came to work for Disney as well as what inspires his Disney work.

David’s Life as an Artist
“Art is in my blood,” David said when I asked him about when he first knew he wanted to be an artist.  “My father was a technical illustrator and did designs for Apollo 11 drafting electronics.  My mother was a fashion illustrator.  My style is similar to my father’s realistic art draftsman-like style.  They were both in the art field and I always had a knack for it.”  Both David’s parents as well as his teachers supported and encouraged his talent.  “They always let me do what I wanted to do.”
David grew up in the Carolinas and found a lot of inspiration in the picturesque scenery and historic homes where he was raised.  He also spent a lot of time at the beach with his family when he was young.  He just had to open his eyes to the landscapes around him to be inspired.  He took a job as a graphic designer at age 19, right after high school.
“The Winston-Salem area has a big art community.  A lot of artists paint what’s around them and that’s what I did.  It’s very therapeutic to do paintings.  I paint what I enjoy.  It’s escapism.  I worked for 20 years as a landscape artist before going to Disney.”

David’s Inspiration and Evolution into Becoming a Disney Artist
David’s first trip to the Magic Kingdom was for one day with a friend in the mid-1970′s when he was just 14.  Like most of us, that’s all it took to start his inspiration.  In addition, the long history of Walt Disney’s original art and animation appealed to his artistic nature.
“I’m a huge Norman Rockwell fan. He is the quintessential American artist.  But, I also really enjoy what the Disney background artists did in the old-school animation.  The background art in the early shorts like Donald’s Dog Wash and Mickey’s Garden are hand-done in watercolor and are the closest thing to what I do.  I also think the background work by Ellenshaw in 20,000 Leagues is phenomenal.”
In 2003, David submitted a painting to a NY publisher (open edition publishing prior to getting to Disney) and they liked it.  The painting was called Mickey and Donald’s Fun in the Sun.  They had him create a few accent pieces to compliment it. These included Mickey’s Dance and Mickey’s Ice Cold Drink.

“The first event that I did for Disney was in the spring of 2004.  The last couple of weeks of Flower & Garden, I filled in for someone who had to leave early.  I did well and was invited back for the Food & Wine Festival that year.  Once I did more Disney images, I started doing events in the Art of Disney Galleries.  This is my 10th year with Disney and I’ve done about 3 or 4 new pieces each year.”
When I asked David what inspires him to create a Disney piece, he said “I paint my favorite things about Disney and the feelings it gives me.  I like the parks.  Walt Disney and his legacy, the things he liked to do, are very inspirational.  The things he imagined, I think he would be very proud to see today.  When I’m at Disney, I often get inspired and start doodling on the back of a business card.  A lot of them have turned into major pieces with only slight tweaks.  I enjoy the nostalgic part of Disney.  For example, in my Resort Collection, I do the nostalgic Disney theme and then the resort is in the background.  With my artwork, I try to help portray the way it makes me feel to be at Disney.  I hope that other people can see what I’m feeling from being there.”

The Development of David’s Disney Art and New Releases
My most curious question for David was about the technical process of how a new piece of Disney art is created.  He explained, “The time to create a painting is about 2 weeks for a larger size and 5 days to a week for smaller ones.  That’s once I know what I want to do.  Concept time can start with that doodle on a business card while at Disney.  I jot something down to jog my memory.  Sometimes I keep a sketch pad with me now.  I draw a sketch to submit to Disney based on my concept.  Approvals take about a week. After that, the reproductions take about 30 days.  In that time, I can have various sizes made along with limited editions.  We do all in-house framing and printing through the Doss Collection.”

“I will have my new pieces at my upcoming events.  They included Fun at Ft. Wilderness, which reminds me of my time as a kid camping.  The other is brand new to the Resort Collection, Boardwalk.”

I asked if there were any new concepts in development that we can look forward to soon and David said, “I’m working on a Wilderness Lodge piece for the future.”  That’s exciting news for those of us who love the Wilderness Lodge!
For fans who would like to purchase some of David’s art, he said, “when I’m at a live event, is the best time to see the most variety of prints and sizes and if you would like something signed.”
David, often with his charming southern belle wife Robin, makes regular appearances at the Art of Disney in Downtown Disney.  He is happy to sign his artwork and speak about both his art and love of Disney during his events.  You may also find them wandering the parks from time to time along with their daughters (one of whom is a Disney cast member).
…I DID!

Currently the Art of Disney Gallery has the largest selection of David’s work when he is not making live appearances.  The Epcot and Magic Kingdom Galleries as well as some of the resorts (Beach Club, Grand Floridian, Old Key West, Contemporary) have select pieces too.

David’s art starts at $30.  Mail order purchases are available through The Art of Disney based on what they have in-stock.  David’s Disney Cruise Line themed art can only be purchased on the cruise ships.
To follow David’s upcoming appearances schedule at Walt Disney World, LIKE his Facebook Page, David E. Doss, Artist.

My personal thank you to Mr. David E. Doss for taking the time to do this interview and for creating art that captures the beauty and peacefulness many of us feel during a Walt Disney World vacation.  Additional thanks goes to Robin, his lovely wife.  Behind every great man is a great woman! Thank you for being a part of my Disney family over the past two years.

Fan Tip: Look for a hidden Mickey image in each piece of David’s art.
Images printed with permission by David E. Doss.

Email ThisBlogThis!Share to TwitterShare to FacebookShare to Pinterest
Labels: Originally published at http://www.wdwfanzone.com/2014/03/meet-david-e-doss-disney-artist/